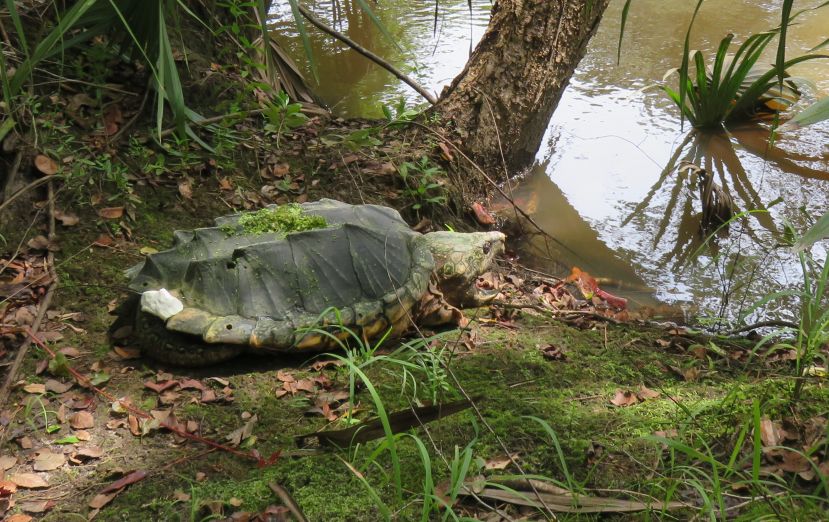 Bradley O'Hanlon, Florida Fish and Wildlife Conservation Commission The alligator snapping turtle, a large freshwater turtle known for powerful jaws that can snap a broom handle in half, is fighting a tough battle.

The U.S. Fish and Wildlife Service is proposing to list the alligator snapping turtle as threatened under the Endangered Species Act (ESA). The proposal follows a review of the best available science that indicates decades of overharvesting for domestic and international meat consumption, impacts from nest predation, recreational and illegal harvest and collection, and fishing activities are taking a severe toll on the turtle, which can grow up to 249 pounds.

"These magnificent reptiles are sometimes called the dinosaurs of the turtle world because they look very prehistoric," said Leopoldo Miranda-Castro, the Service's Regional Director for the South Atlantic-Gulf and Mississippi-Basin regions. "The impacts of overharvesting and other human activities, along with the reality that they take up to 21 years to reproduce combined to put the alligator snapping turtle in peril. The Service will continue to work with all the state agencies to gather the necessary science to conserve and manage this iconic species."

Ongoing conservation measures the Service is undertaking on behalf of the alligator snapping turtle include captive rearing and release and habitat restoration and improvement. Tishomingo National Fish Hatchery in Oklahoma initiated a captive breeding program in 1999 to produce head-started alligator snapping turtles for reintroduction. The Natchitoches National Fish Hatchery in Louisiana has also begun a head-start program for the same purpose. In addition, the species is listed under the Convention on International Trade in Endangered Species (CITES) of Wild Fauna and Flora, an international agreement between governments designed to ensure trade in specimens of wild animals and plants does not threaten their survival.

Alligator snapping turtles get their name from large, powerful jaws and shells that can resemble the rough, ridged skin of an alligator. Adult males can weigh up to 249 pounds; females are much smaller. Known from 14 different states across the Southeast, Midwest and Southwest, the alligator snapping turtle is the largest freshwater turtle in North America.

A thorough scientific review of the status of the alligator snapping turtle was conducted by the Service through a Species Status Assessment (SSA), which reflects input from many partners and has been peer- and partner-reviewed. The SSA conducted for the alligator snapping turtle showed its populations are in decline and expected to continue to decline into the foreseeable future. Factors affecting the future viability of these turtles include legal and illegal harvest, drowning as a result of by-catch from recreational and commercial fishing, hook ingestion, habitat alteration and nest predation. Historically, commercial and recreational take in the 20th century resulted in significant declines to many alligator snapping turtle populations. Commercial harvesting of alligator snapping turtles that depleted populations in Louisiana, Florida, Georgia and Alabama is now prohibited in all states within its range. Recreational harvest continues in Louisiana and Mississippi but is prohibited in all other states where the species occurs. The SSA can be accessed at https://ecos.fws.gov/ServCat/.

For threatened species, the Service uses the flexibility provided under section 4(d) of the ESA to tailor take prohibitions for the conservation of the species. This targeted approach helps reduce regulatory burdens by excepting from prohibitions certain activities that do not significantly harm the species, or that are beneficial, while focusing conservation efforts on the threats detrimental to recovery.

The Service is applying prohibitions consistent with those for endangered species with exceptions from prohibitions associated with captive breeding for conservation, turtle farms with legally acquired brood stock, Tribal employees carrying out certain actions, and state wildlife rehabilitation facilities. In addition, exceptions from incidental take resulting from construction and silviculture practices that implement Best Management Practices (BMPs), pesticide use according to label, and maintenance dredging in maintained channels is included in the proposed 4(d) rule. For additional details on the Service's proposed 4(d) rule for the alligator snapping turtle, please visit our Frequently Asked Questions.

The Service will accept comments received or postmarked on or before January 10, 2022. Comments submitted electronically using the Federal eRulemaking Portal (http://www.regulations.gov) must be received by 11:59 p.m. Eastern Time on the closing date. In the Search box, enter FWS–R4–ES–2021–0115, which is the docket number for this rulemaking.

The Service has scheduled a virtual public meeting and hearing on December 7, 2021 from 6:00 – 8:30p.m. CT (7:00 – 9:30 p.m. ET) via the Zoom online video platform and via teleconference. This virtual public meeting and hearing is intended to give the public an opportunity to learn more about the proposed listing of the alligator snapping turtle and an opportunity to comment on the proposal. Registration is required and can be done online at:

If you suspect someone is illegally removing live alligator snapping turtles, or any other species, please call the Service's wildlife trafficking tips line at 1-844-FWS-TIPS (397-8477) or email This email address is being protected from spambots. You need JavaScript enabled to view it.. You might be eligible for a financial reward if your tip helps solve a case. More information on how to report wildlife crime is available at the link below: