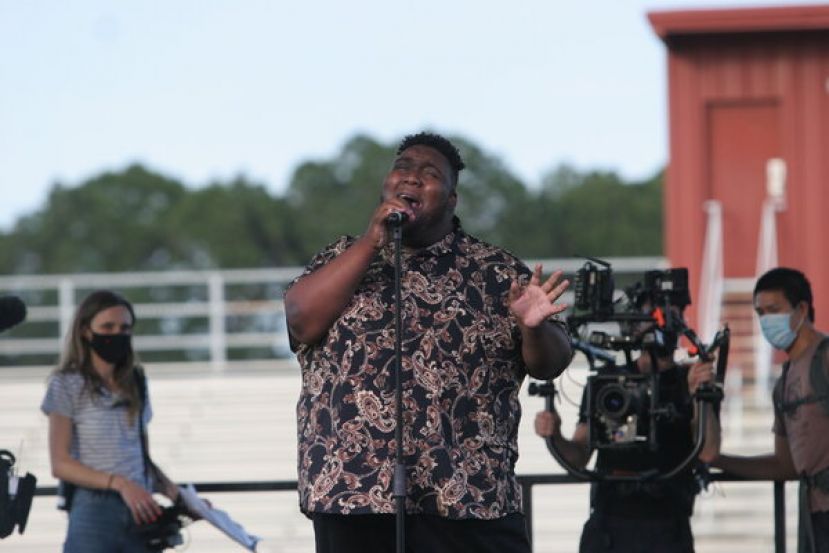 Willie Spence, 21, one of American Idol’s Season 19 top three finalists, had quite a homecoming Tuesday.

Spence, accompanied by an American Idol film crew, arrived in Douglas Monday night after landing at the Valdosta airport. A motorcade from Douglas escorted him back home, where he spent the evening with family and friends for a little downtime before hitting the ground wide open Tuesday morning.

Spence started off the day at the Coffee County Courthouse, where film crews from area television stations spent a few minutes with him. Then he visited people and places around town that were important to him growing up. This is a standard feature of the final episode of each American Idol season; film crews were with Grace Kinstler and Chayce Beckham, the other two finalists, today as well.

Later in the afternoon, a parade that wasn’t a parade just kind of happened through the city streets of Douglas, with fans lining the streets with signs and offering words of encouragement to their hometown hero.

The day concluded at Jardine Stadium, where 1,400 fans enjoyed a short concert – and all the accompanying fanfare – portions of which will be broadcast on Sunday’s season finale prior to announcing the winner of this year’s competition. The concert featured the standards Spence’s fans have come to know and love from the television show, including “Glory” and “Diamonds.”

While he was in town, Mayor Tony Paulk presented Spence with a key to the city. Gov. Brian Kemp also signed a proclamation designating this week as Willie Spence Week throughout Georgia.

“I love my hometown. Thank y’all from the bottom of my heart. This was definitely the best day of my life,” said Spence during Tuesday night’s performance.

This Sunday, the winner will be named during a three-hour season finale. Beckham, Kinstler, and Spence will perform one more time during the episode. Additionally, each of the three judges – Lionel Richie, Katy Perry, and Luke Bryan – will perform a song as will the rest of the top nine. During the finale, viewers will be able to vote for the next American Idol throughout the show beginning when the episode opens at 8 p.m.