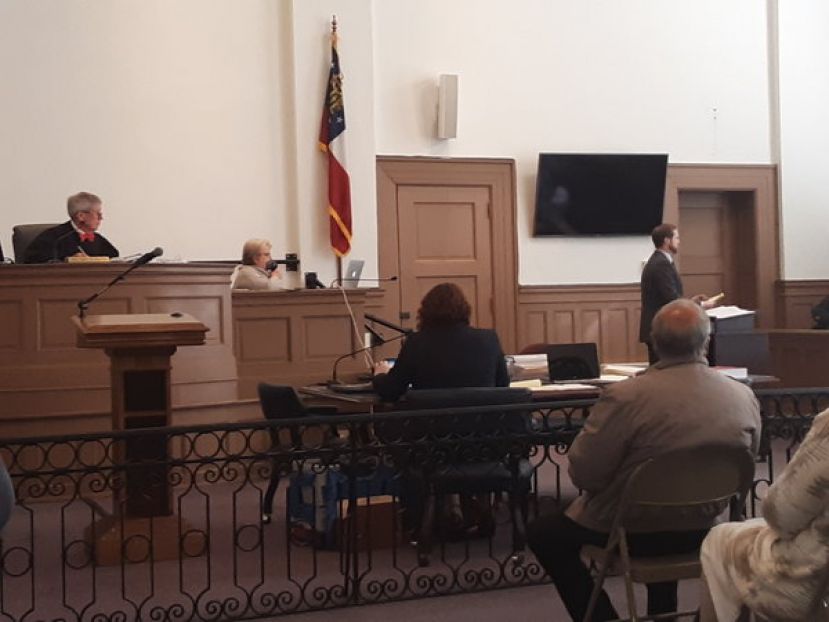 Bo Dukes’s trial began today in Wilcox County. He stands charged with two counts of making false statements, hindering the apprehension of a criminal, and concealing the death of another in the death of Tara Grinstead. Ryan Duke, who has been charged with Grinstead’s murder, will go on trial in Ocilla beginning April 1.

District Attorney Bradford Rigby is prosecuting Mr. Dukes and his defense is led by John P. Fox of Macon. Chief Superior Court Judge of the Cordele Circuit Robert Chasteen is presiding in the case and court was called to order in Abbeville at 9:24 AM.

Judge Chasteen started the sifting of potential jurors, known as voir dire, by asking the men and women to indicate by raising their hand if they were related by blood or marriage, third cousin or closer, to the defendant Bo Dukes. A husband and wife were excused from the jury pool because of being related to Mr. Dukes.

After a few more questions aimed at the pool of around 100 potential jurors, the judge began asking them to come forward in groups of twelve. These smaller groups were questioned each in turn by Mr. Rigby and Mr. Fox.

Mr. Rigby asked each group very similar questions. He wished to know if the men and women knew Bo Dukes or his mother, Dixie Hudson. Many people in this small community do. Mr. Rigby closely questioned each person who said they knew Mr. Dukes or Ms. Hudson. Mr. Rigby was also interested in determining the existence and the nature of relationships between potential jurors and the witnesses to be called such as Randy Hudson, Joe Portier, Garland Lott, John McCullough, Wes Connor, and the late Newt Hudson. Mr. Rigby also asked about the potential jurors’ relationships with Ryan Duke, who faces trial for murder in Irwin County beginning April 1, as well as with Ryan Duke’s mother and father

Mr. Rigby showed a marked interest in the jury pool’s exposure to media coverage of the case. Mr. Rigby questioned the men and women rigorously regarding what they knew of the “Up & Vanished” podcast and the television special covering the Grinstead case which aired on the Oxygen network. Those programs featured Ashleigh Merchant, a lawyer who now represents Ryan Duke. Mr. Rigby was concerned that Ms. Merchant’s on-air pontificating would affect the jurors’ ability to be impartial.

Mr. Fox questioned the panel mostly about their legal training, connections to law enforcement and experience with drugs and alcohol. He also wanted to know if any of the potential jurors had ever been educators, as was Ms. Grinstead, as well as whether they participated in or donated funds to the efforts to find Ms. Grinstead after she disappeared.

Mr. Rigby and Mr. Fox moved through four panels of potential jurors in this manor, questioning 48 people. At 2:30 pm the process changed and the lawyers began questioning some of the men and women, one by one, at the bench. Finally, just before four o’clock, twelve jurors and three alternates were sworn in.

The lawyers then questioned two GBI agents about Mr. Dukes’ statements to them. This questioning occurred with the jury out of the courtroom, and barely touched on the substance of Bo Dukes’ statements, which were recorded. It centered on the Miranda rights being read to Mr. Dukes and when specifically the interviews between law enforcement and Mr. Dukes occurred.

The jury was then brought in and Mr. Rigby gave his opening statement. He stepped in front of the jury box and said, “It takes twelve hundred degrees to burn human bone. Pecan wood burns really hot.” He then repeated the phrase and told the jury that these were the words of the defendant as reported by one of the witnesses he would soon call. Mr. Rigby spoke of the horror of Tara Grinstead’s murder in the most powerful terms, telling the courtroom that a forensic anthropologist had to be called in to find the tiny remnants, a tooth, a bone shard, of what had once been a vibrant and beloved young woman.

As one may well anticipate, Mr. Fox’s opening statement was very different. He said that this case revolves around a fifteen minute interview at the Rochelle Police Department. He reminded the jury that Mr. Dukes faces charges in Ben Hill County for burning Ms. Grinstead’s body. He called them to pay attention to the evidence, but also the gaps in the evidence.

It was 5:00 PM when Judge Chasteen told Mr. Rigby that he could call his first witness. Mr. Rigby’s co-counsel JD Hart of the Tift Circuit questioned Ms. Kim Sheridan. Ms. Sheridan is the mother of Bo Dukes’ girlfriend, Brooke Sheridan. Ms. Kim Sheridan said that in early 2017 her daughter called a family meeting and stated to everyone present that her boyfriend, Bo Dukes, had told her that he had helped dispose of the body of Tara Grinstead, even letting Ryan Duke, his roommate at the time, use his truck to transport the body to his family’s farm. The witness was horrified by this revelation and she immediately contacted the authorities on her daughter’s behalf. Later, Ms. Sheridan said that she had spoken with Bo Dukes about the crime. Ms. Hart asked Ms. Sheridan if she ever asked Bo why Ryan killed Tara. Ms. Sheridan said that yes, she had. Bo Dukes’ response as to Ryan Duke’s motive? “Bo said he never asked Ryan why he killed her,” said Ms. Sheridan.