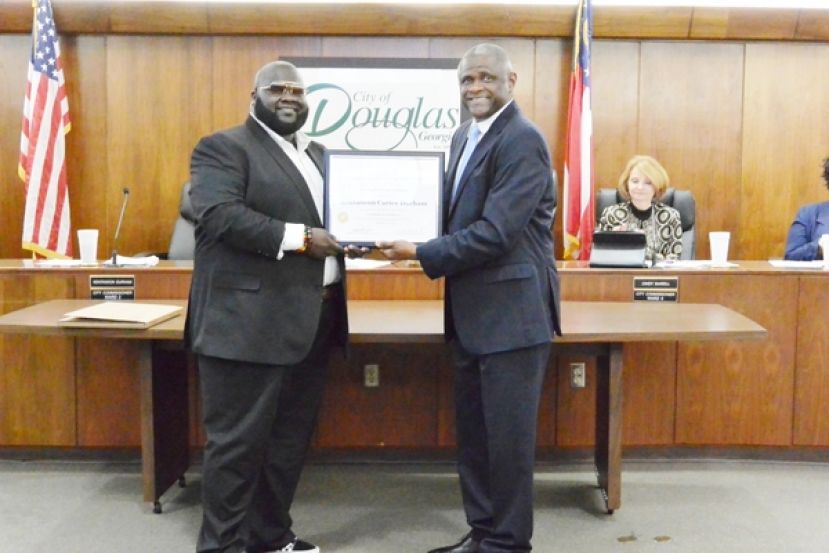 Kicking off Tuesday’s regular work session and meeting of the Mayor and Douglas City Commission, the Commission took up consideration of whether to approve appointment of Ms. Jennifer Chilton to a two-year term on the Air Base Preservation and Economic Development Committee. Ms. Chilton is currently the Visitor Center Manager for the Douglas-Coffee Co. Chamber of Commerce. Community Development Director Georgia Henderson presented the proposal and recommended that Ms. Chilton be appointed. This proposal was placed on the consent agenda.

Henderson presented this proposal. She told the Commission that even now, prior to the RFP, there are four interested buyers. Dir. Henderson also presented a letter from Chairman of the Downtown Development Authority (DDA) Scott Moore. Chairman Moore’s letter stated that the “DDA would like to explore the possibility of taking possession of the Martin and utilizing it as a fundraising arm to allow us to continue to improve our downtown”. Ward 3 Commissioner Pearson stated a desire to hear from the prospective buyers, while City Attorney Jerome Adams was curious as to whether the DDA would take full responsibility for the property. Mr. Adams further stated that in his opinion the appraisal value of $210,000 was an accurate one. Ward 5 Commissioner Cindy McNeill expressed a desire to hear from the DDA as well as any prospective buyers. This proposal was also placed on the consent agenda.

Next the Commission considered whether to hire Markey and Associates, Inc. (Markey) of Kennesaw to provide an architectural plan to renovate the city pool. This plan to renovate is sought in order to provide a uniform design so that more construction companies may bid upon the project and not be burdened with supplying their own design. Markey’s proposal stated that their design would cost $50,000. This was observed to be reasonable as architectural design work generally costs around four to five percent of the cost of the final project. The renovation of the city pool facilities is budgeted at $1.25 million, four percent of which is exactly $50,000. Mayor Pro Tem Mike Gowen expressed a desire to know more about Markey before approving this fee for their design. Soon thereafter the work session adjourned.

More in this category: « Accused drug dealer flees deputies and crashes car, apprehended the following day A piece of aviation history took to the skies over Douglas this week »
Login to post comments