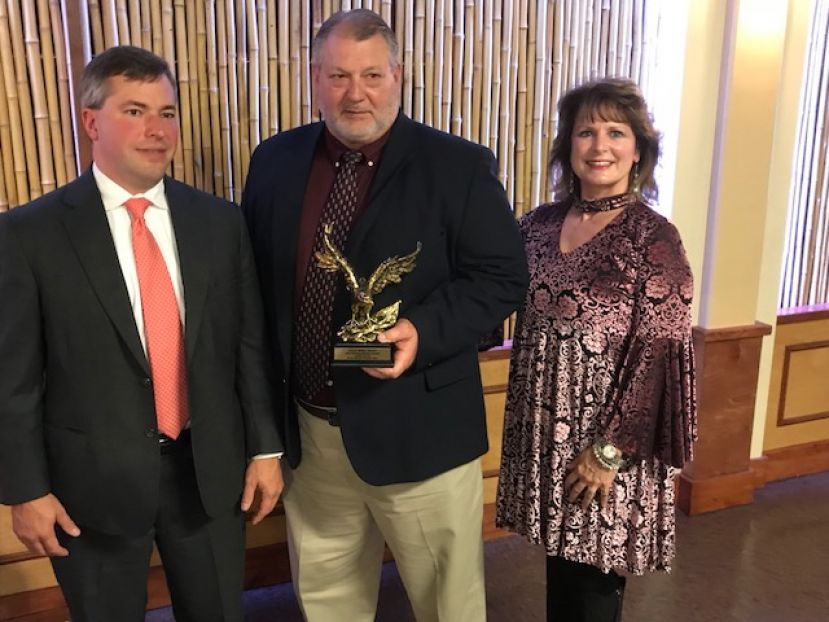 “Coach Pruitt constantly reminds the players that what you’re doing in football will make you a better man. And in the process of making better football players, he makes better men,” said Coffee High Athletic Director Randy Garrett as he introduced Coach Pruitt Thursday night.

“The thing that makes this so special is because it comes from an organization that mirrors the things we try to do as a coaching staff. They try to do the same principles, the same things that we teach,” said Coach Pruitt as he accepted the award. “I have a great amount of respect for what scouting stands for and what the organization tries to teach.”

Coach Pruitt’s list of accomplishments is among the most impressive you will see for any coach in any sport in the country. Most recently, he and his staff guided the Coffee Trojans to their first ever state championship game.

Over the course of his career, Coach Pruitt’s record stands at 340-79-1. He’s played for two state titles in Georgia – in 2000 with Fitzgerald and 2017 with Coffee. His record in Georgia is 173-49-1. While a state title in Georgia has thus far eluded him, in Florida, his teams won seven state championships – more than any other football coach in the state. At University Christian, Coach Pruitt won four state championships and finished runner-up once. From there, he went to Union County where he won three straight state championships and at one time enjoyed a Florida state record 52 consecutive wins. Coach Pruitt has been named Coach of the Year 17 times by various organizations in Florida and twice been named a national coach of the year – NFICA National Coach of the Year in 1996 and Bobby Dodd National Coach of the Year in 1998. Most recently, he was named the greatest high school coach in the First Coast area across all sports in a Florida Times-Union reader poll.

In 2000, Coach Pruitt was inducted into the Florida High School Athletic Association’s Hall of Fame. He was then and remains the youngest coach to receive such an honor.