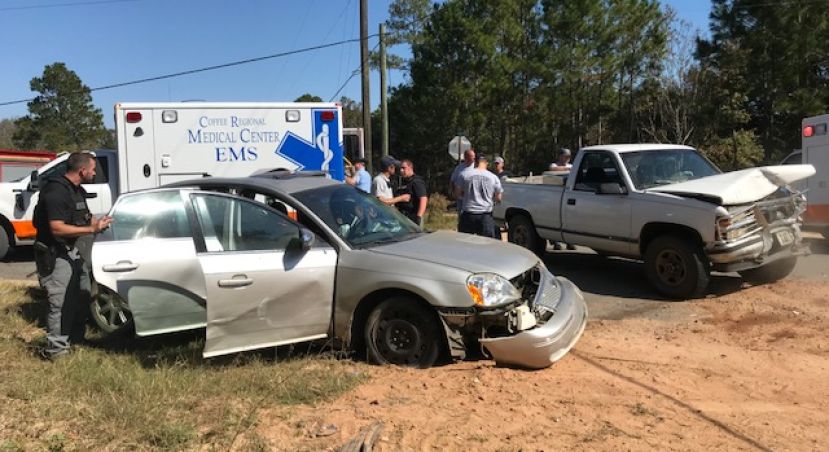 Robert Preston Jr./DouglasNow.com A deputy investigates the scene of an accident caused when a vehicle driven by Brad Lowery crashed into a pickup while leading officers on a high speed chase Sunday morning. When this photo was taken, Lowery was in the ambulance in the background. Eventually, he was airlifted from the scene to Macon.

You know, it would have been a lot easier to just pay for the gas. Brad Lowery, however, apparently felt stealing gas was the better option. He learned the hard way that wasn’t. As a result, he’s in a Macon hospital recovering from a serious auto accident and faces numerous charges for his poor decision making.

WALB is quoting sources from the Georgia State Patrol stating that Lowery allegedly stole some gas from a store in West Green. He fled the scene and headed toward Broxton. There, Isaac Garcia of the Broxton Police Department attempted to stop Lowery. He decided to flee and led officers from Broxton, the Coffee County Sheriff’s Office, and the Georgia State Patrol on a chase from Broxton to Ambrose. Somewhere along the way, he slowed down enough to let two passengers out of his car before continuing his poorly thought-out escape.

Near Ambrose at the intersection of Dennis Harper Road and Palmetto Road, Lowery crashed into a Chevrolet pickup. The collision seriously injured Lowery and trapped him inside the car. Officials on the scene cut Lowery out of his vehicle with the jaws of life and placed him in an ambulance. Due to the severity of his injuries, they decided to fly him to Macon instead of transporting him to Coffee Regional Medical Center. The Air-Evac helicopter landed on the opposite side of Highway 32 and EMTs ferried Lowery across the road to the chopper.

The driver of the pickup complained of injuries and was taken to CRMC for treatment.

Lowery will face a number of as yet undisclosed charges. The two individuals whom he let out of the car during the chase will not be charged.

More in this category: « Officers arrest, jail Douglas man for allegedly beating a woman House erupts into flames, no one injured »
Login to post comments