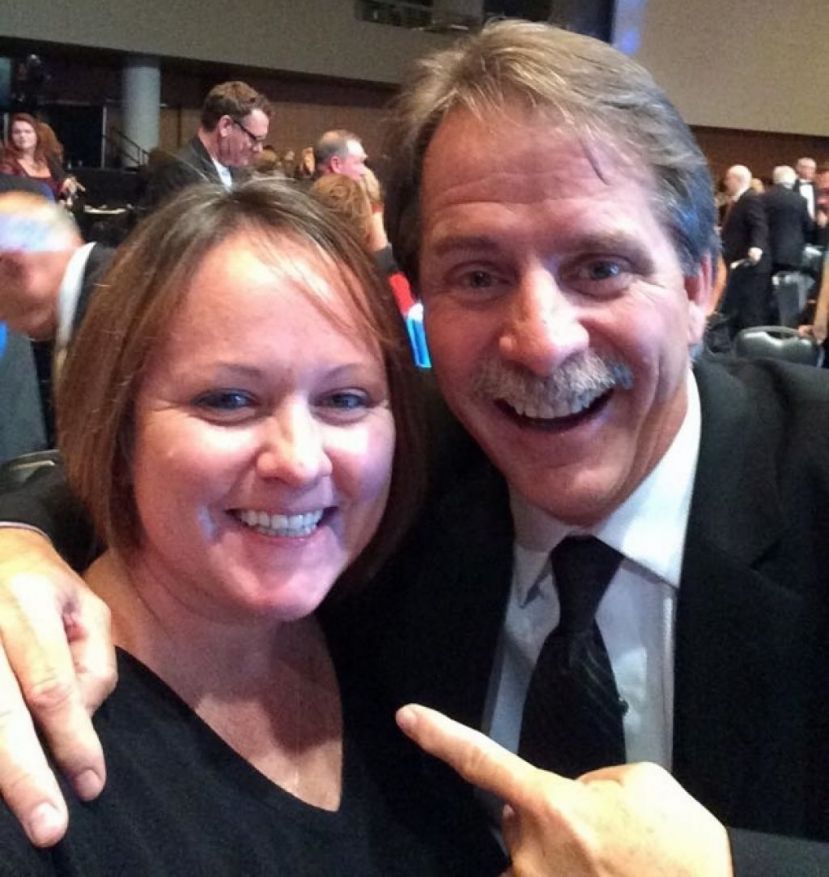 DouglasNow.com file photo Shani Sammons of Douglas, seen here with comedian Jeff Foxworthy, has been appointed to the Georgia Music Partners Board of Directors.

Georgia Music Partners (GMP) announced the appointment of Shani Sammons, a Douglas native and graduate of Coffee High School, to the board of directors; and David Barbe, DiAndria Green and Craig Hoffman to the advisory board. The additions provide skills and experience in consulting, education, digital engagement and management within the music industry, both, in Georgia and nationally.

Tammy Hurt, GMP President said, “I’m thrilled GMP is attracting world-class talent to our rankings and sincerely looking forward to the impact they will have not only on our organization, but also the music business in Georgia.”

David Barbe is the Director of the UGA Music Business Program, (2010-present), serves on the Board of Directors for Nuçi’s Space (2009-present) and is a board member of The Recording Academy, Atlanta Chapter (2016-17). He has played in touring/recording bands (Sugar, Mercyland, Drive-By Truckers, The Bar-B-Q Killers), engineered and/or produced several hundred albums (Deerhunter, Drive-By Truckers, Son Volt, Amy Ray, New Madrid) and is the owner of Chase Park Transduction recording studio in Athens, Georgia (1997-present).

DiAndria Green is a Manager in Bennett Thrasher’s State and Local Tax (SALT) consulting practice where she focuses on advising motion picture studios, television networks, independent film producers, and digital entertainment companies across the country on how to pursue, utilize, and monetize movie production incentives and film tax credits. Her work primarily consists of educating clients on the law surrounding available state film tax credits and the qualifications required in pursuing those credits. In connection with assisting clients with claiming film tax credits, DiAndria also analyzes production expenses to determine qualifying expenditures, conducts due diligence reviews, and drafts due diligence reports that indicate relevant procedures and findings. DiAndria has over 8 years of tax consulting and business development experience. She graduated from Florida Agricultural & Mechanical University with a Bachelor of Science in Business Administration. DiAndria received her Juris Doctor from Texas Southern University (Thurgood Marshall School of Law) and her LLM in Taxation from Boston University.

Craig Hoffman serves as the Chief Financial Officer of Monarch Private Capital. Hoffman is responsible for oversight of all finance, treasury and accounting functions. He monitors MPC investment funds, tracks the performance of the firm’s investments and is directly involved with transaction structuring. Hoffman has 25 years of professional experience, with more than 15 years devoted to acquisitions, transaction structuring and finance. Prior to MPC, he worked as an investment banker and head of a mergers and acquisitions group for a publicly traded company. Hoffman’s career began at Arthur Andersen & Co., where he practiced M&A corporate tax work in Atlanta, GA. He holds an MBA from the Columbia Graduate School of Business, a Bachelor’s degree from Furman University and was previously a CPA and Series 24 license holder.

Georgia Music Partners (GMP) is the authority that grows and improves the music economy in Georgia. GMP encourages the state’s musicians, music professionals, educators and legislators to work together to further develop Georgia’s music industry through creativity and innovation. GMP is actively engaged with educators, local and state governments, business organizations, and music business leaders in pursuit of cooperation that promotes growth for all stakeholders. Through these partnerships, the organization seeks to develop programs, which enable the state to better market the music business in Georgia, and works to attract investment dollars for music technology companies to headquarter here. GMP seeks not only to sustain the music industry, but also holistically grow Georgia’s economy.