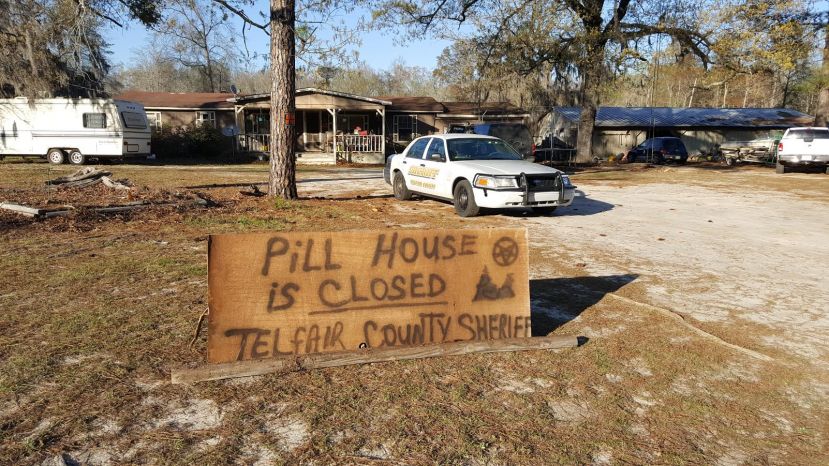 The Telfair County pill house is closed, says the sign.

On Wednesday March 8, as a result of a four-month-long investigation targeting an individual suspected of illegally buying and redistributing prescription medications, Telfair County deputies executed a search warrant on a residence in the county. As a result, deputies discovered and seized thousands of pills of various controlled substances and schedules, numerous firearms, 15 slot machines, and over $12,000.

Deputies arrested two people inside the residence were taken into custody and will face a multitude of charges.

Bethany Dawn Thompson, 25, of a Brunswick address, will be charged with conspiracy to commit a crime. Other charges will be added when appropriate as investigation is ongoing. Investigators will continue interviewing suspects and witnesses, viewing home security video footage, as well as processing the records and other evidence obtained from the residence in an effort to identify other individuals connected to or involved in the buying or selling of pills and other forms of controlled substances.  More arrests are anticipated as other suspects are identified.

"This investigation began after concerned citizens alerted me to unusual and suspicious activity in the area of the Sirmans residence near Lumber City. Our deputies patrolling the area quickly developed the necessary information that assisted sheriff's investigators in building a rock solid case against the suspects. This is one fine example of what a citizen/sheriff's office partnership can accomplish for our community. In this case, a suspected major supplier of dangerous prescription drugs is now out of business and if convicted, will likely spend the rest of his life in a prison cell where he will never attribute to the death or demise of another person suffering from an addiction to prescription pills. We can be proud of those concerned citizens for getting involved, as well as our exceptionally hard working and determined deputies and investigators who worked this investigation tirelessly from start to finish.  If not for the actions taken by these private citizens and our law enforcement, untold thousands of pills would without a doubt continue flowing through this network,” states Sheriff Chris Steverson.