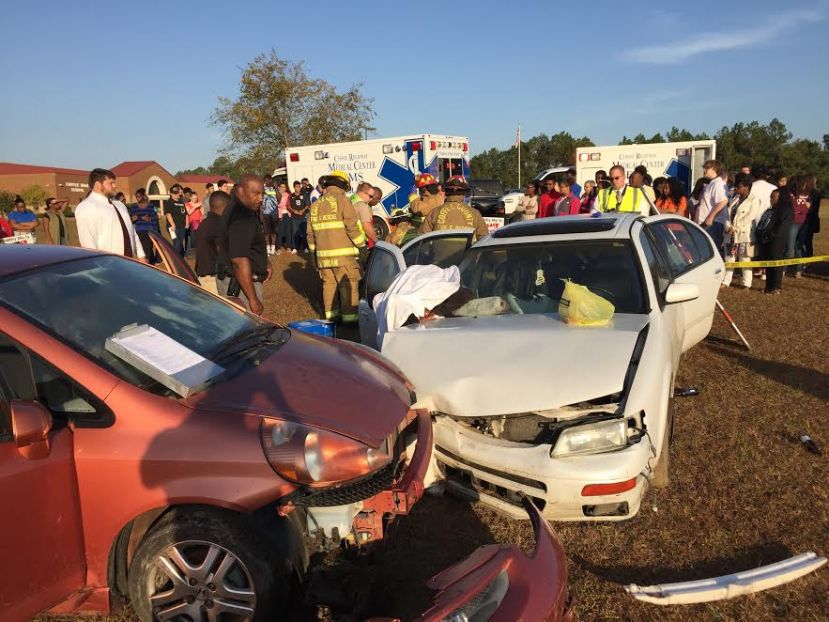 Robert Preston, Jr./DouglasNow.com A CHS student portraying a deceased victim in a drunk driving accident, is covered by a sheet atop one of the two vehicles involved in the mock wreck Wednesday morning at Coffee High School. He was actually placed in a body bag, zipped up, and put in the back of a Sims Funeral Home hearse during the realistic accident scene.

Wednesday morning, students at Coffee High School witnessed in shocking detail the potential consequences of drinking and driving. In observance of Red Ribbon Week, which is a week set aside each October to warn kids of all ages of the dangers of alcohol and drugs, Coffee County Family Connection, in conjunction with the CHS Drama Club, FBLA, the sheriff’s office, Coffee County Fire Department, Coffee County Air-Evac, EMS, and Sims Funeral Home, set up a wreck scene outside the CHS gym.

The realistic scene featured two cars that had just had a head-on collision with accident victims both inside and outside the vehicles. The cause of the mock wreck was drinking and driving, and two of the “victims” were deceased. The others suffered serious injuries, one of which was taken on a stretcher to an Air-Evac helicopter that landed on the grounds of the high school.

The Centers for Disease Control and Prevention reports that one in 10 teens in the U.S. drinks and drives. Teens are 17 times more likely to die in an auto crash if they have a blood alcohol concentration of .08 percent or higher. One in five teen drivers involved in fatal wrecks had some amount of alcohol in their systems in 2010.