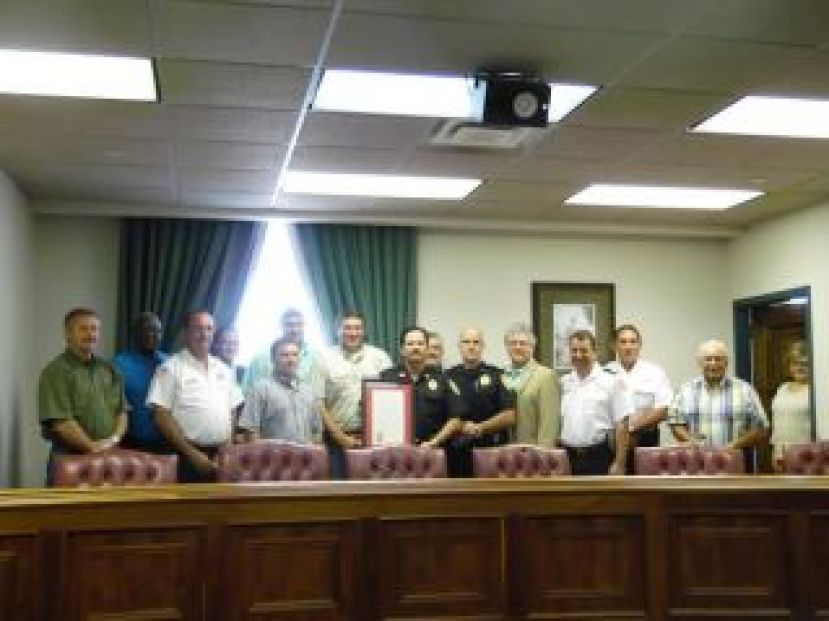 State Sen. Tyler Harper and Rep. Dominic LaRiccia formed a resolution to honor first responders in Douglas and the entire state of Georgia. The resolution was read at the county commission meeting on Monday, Aug. 17. To counter the growing negative light surrounding the police force and many first responders in the nation, Harper’s and LaRiccia’s resolution offers a heartfelt thanks to those men and women whose work is taken for granted. From police officers to EMTs to 911 operators, each person who makes personal sacrifices to help save the lives of others and to keep our communities safe is thanked and honored in the resolution. First responders of Douglas were present at the reading and were then presented with a plaque of commemoration.

September is officially recognized by Coffee County as Childhood Cancer Awareness Month. Barbara Dockery of the Childhood Cancer Awareness Group in Douglas spoke at the meeting and delivered a heartfelt message about what the group does. When a family is diagnosed with childhood cancer, it is devastating not only emotionally and physically but also financially. Transportation, medical costs, grocery costs, even bills can be paid or funded by the group since in many cases parents must forgo jobs to help aid their child in sickness. The funds are raised through selling of t-shirts, bake sales and auctions which all take place in September. On Sept. 26, a bake sale and silent auction for childhood cancer awareness will take place from 8 a.m. to 3 p.m. There will be a live auction at 7 p.m. Beta Sigma Phi will also be selling mums for the group during September.

The Georgia State Patrol Post requested a barrier around its property to help keep the property and  patrol officers safe. Coffee County Commissioners approved a bid from Bulldog Fencing for the 567 foot chain-link fence and gate for $10,304.

There was more discussion about the cleanup at Oak Park and during the work session. A land bank authority, represented by both the city and the county, could obtain properties throughout Coffee County that are donated and fund restoration or sell the property to individuals prepared to restore the property or build a new home on the property. Homes or property in disrepair are often purchased and left alone for a number of years, which takes the property off the market for those who need a home. The authority would be able to impose a time limit for purchasers to repair, restore, or rebuild the homes on the property so as to maintain housing in the area. County commissioners are reviewing the details of the process and tabled further discussion for a later date.

Because the next County Commission meeting falls on Labor Day, the next meeting has been moved up to Sept. 8.