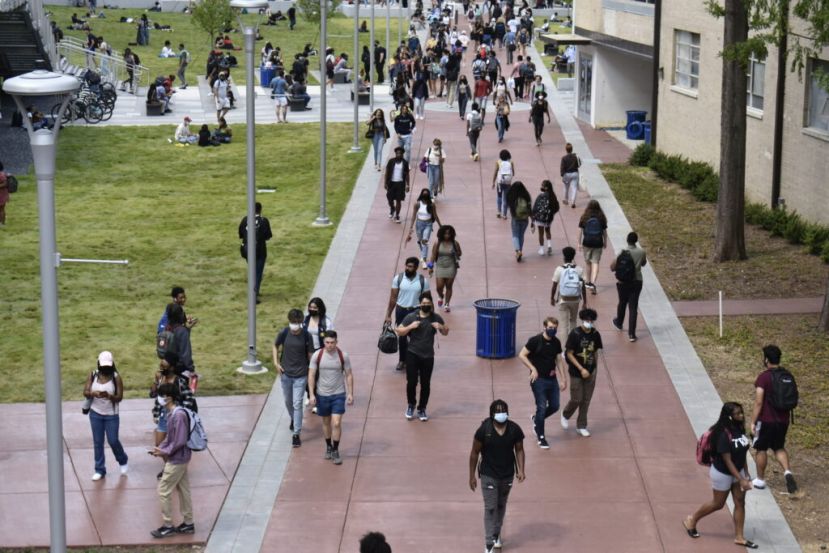 Photo courtesy of Ross Williams/Georgia Recorder Georgia State University boasts one of the most diverse student bodies in the country and continues to use affirmative action criteria in admissions.

The U.S. Supreme Court’s conservative majority on Monday questioned the legality of race-conscious policies in college admissions, as the justices weighed two cases that could upend the admissions process many colleges use to try to boost diversity on campus.

At issue are two cases that challenge the lawfulness of affirmative action at Harvard University, the nation’s oldest private university, and the University of North Carolina, one of its oldest public universities.

Depending on the scope of the court’s ruling, the outcome of these lawsuits could affect admissions at hundreds of colleges and universities across the country and even potentially affect broader efforts like workplace diversity programs.

The oral arguments, scheduled to last just over two-and-a-half hours, stretched for nearly six hours in one of the most controversial cases before the court this year

Members of the court’s conservative wing, who now make up a 6-3 majority of the bench, questioned if it is legal for universities to consider race and for how long such policies should endure.

Justice Clarence Thomas, a conservative justice from Pin Point, Georgia and the only Black man on the Supreme Court, asked each of the lawyers who argued in favor of UNC’s admissions process to explain how racial diversity benefits the educational experience of students.

“I didn’t go to racially diverse schools but there were educational benefits. And I’d like you to tell me expressly when a parent sends a kid to college that they don’t necessarily send them there to have fun or feel good or anything like that. They send them there to learn physics or chemistry or whatever they’re studying,” Thomas said to Ryan Park, the attorney representing UNC. “So tell me what the educational benefits are to that?”

Thomas sounded unmoved: ”Well, I guess I don’t put much stock in that because I’ve heard similar arguments in favor of segregation too.”

Justice Brett Kavanaugh asked how religious diversity is considered in the admissions process and why it has “disparate treatment” from racial consideration.

The more liberal justices, who are in the minority, defended the use of race in admissions and argued it would be difficult to achieve diversity without any consideration of race.

Justice Elena Kagan, the former dean of Harvard Law School, noted the importance of racial diversity on college campuses because they are “pipelines to leadership in our society.”

Justice Ketanji Brown Jackson questioned if a college could consider the breadth of a student’s experience without consideration of race.

“What I am worried about is … the context of a holistic review process of a university that can take into account and value all of the other background and personal characteristics of applicants, but they can’t value race,” Jackson said in arguments with the lawyer challenging UNC’s policies.

“What I’m worried about is that it seems to me to have the potential of causing more of an equal protection problem than it is solving,” Jackson added.

Jackson participated in the debate of the UNC case but not the Harvard case. Jackson, the first Black woman to serve as a Supreme Court justice, is a graduate of Harvard College and Harvard Law School and sat on the Harvard Board of Overseers until last spring.

‘How do you know when you are done?’

Since 1978, the Supreme Court has maintained that colleges and universities may consider race or ethnicity as a “plus factor” in admissions to try to create more diversity on campuses.

Schools cannot have racial quotas or use race as a sole determining factor. It is one factor among many they may consider in acceptance.

But the victories for affirmative action have been narrow in the last three different Supreme Court decisions, where the justices split 5-4, 5-4 and 4-3 to uphold its constitutionality.

The Supreme Court last ruled on an affirmative action case in 2016, recent history in the timeline of case law.

Chief Justice John Roberts, Thomas and Justice Samuel Alito were the dissenters in the 2016 decision. Now they have three more conservatives on the bench with them: Kavanaugh, Amy Coney Barrett and Neil Gorsuch.

Several of those more conservative justices questioned if the policy should endure. They noted that one of the precedent-setting cases itself warned that such policies should not go on forever. The 2003 Grutter vs. Bollinger case that allowed the limited use of race in college admissions also forecast that affirmative action would no longer be needed 25 years after the ruling.

The court’s conservative justices asked if colleges are reaching the end of that timeline, 19 years later.

“When do you read or do you calculate, to the extent you consider it at all, the 25-year limit?” Kavanaugh asked.

They also questioned how to determine if the goals of affirmative action are ever reached.

“How do you know when you are done? When would you have the endpoint?” Barrett asked.

“I don’t see how you can say that the program will ever end,” Roberts told UNC lawyer Ryan Park.

Gen. Elizabeth Prelogar, solicitor general for the Department of Justice, joined the defendants to argue in favor of current policies. She noted racial diversity is particularly important at the nation’s military schools and academies to help ensure a more diverse officer corps that reflects the diversity of enlisted soldiers.

But she said the effects of a ruling could be much more broad.

“The petitioner seeks a sweeping ruling that would harm students at schools and colleges throughout the nation. A blanket ban on race conscious admissions would cause racial diversity to plummet at many of our nation’s leading educational institutions,” Prelogar said.

“Race-neutral alternatives right now can’t make up the difference, so all students at those schools would be denied the benefits of learning in a diverse educational environment. And because college is the training ground for America’s future leaders, the negative consequences would have reverberations throughout just about every important institution in America.”

But the immediate effects in Georgia could be muted because of a decades-old court ruling.

In 2001, the U.S. Court of Appeals for the 11th Circuit ruled in favor of a trio of young women who were rejected from the University of Georgia, which, at the time, awarded a bonus to non-white and male applicants.

The court found that the admission process violated the Equal Protection Clause of the Fourteenth Amendment.

Most Georgia public colleges now do not consider an applicant’s ethnicity, according to information aggregated by CollegeData.com, with exceptions including Georgia Tech and Georgia College and State University. Emory University, the state’s largest private school, also considers an applicant’s race.

Georgia’s nonwhite student population has grown in recent years, increasing from 46% of the population in spring 2012 to 49.3% in 2017 to 54% this spring. The same time period has also seen Georgia’s population as a whole become more diverse, according to census numbers.

The nonprofit Students for Fair Admissions filed the lawsuits to argue that consideration of race is discriminatory and violates civil rights laws.

In the North Carolina case, it argues the university discriminates against white and Asian American applicants by giving preference to Black, Native American or Hispanic applicants.

“What Harvard is doing to Asians, like what it was doing to Jews in the 1920s, is shameful, But it’s a predictable result of letting universities use race in highly subjective processes,” Cameron Norris, the lawyer arguing against the Harvard policy, told the court. Harvard limited the number of Jewish students it accepted in the 1920s.

The cases are the pinnacle of decades of legal challenges from Students for Fair Admissions, a group started by Edward Blum, a retired financier and conservative legal activist who has launched other lawsuits over what he sees as racial preferences in school admissions.

The Georgia Recorder’s Ross Williams contributed to this report