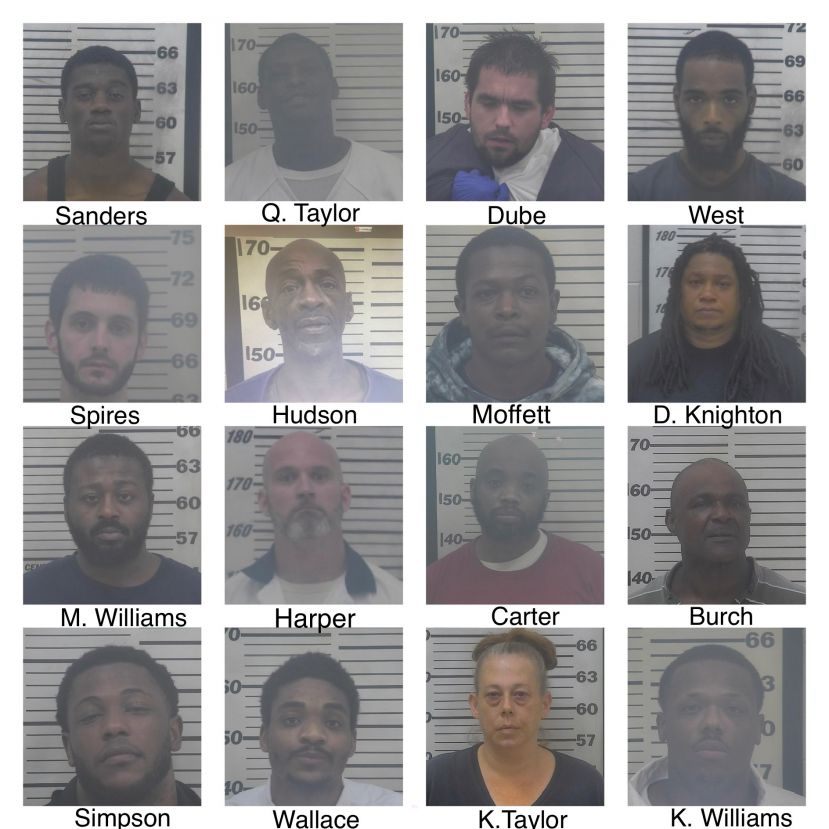 A total of fourteen pending cases in the Superior Court of Coffee County are now ready to be presented to a jury during September's criminal trial week scheduled for the end of the month.

Burch's case dates back to 2020 to an altercation at a residence on West Bryan Street in Douglas. According to a copy of Burch's arrest warrant, he is accused of pointing a weapon at a female on the property on April 9, 2020. Officers arrested Burch on the charges and booked him into the Coffee County Jail. Documents in the Superior Court of Coffee County do not show an order granting Burch a bond. However, he is currently not shown on the Coffee County Jail's roster.

Simpson is also facing two charges he received in 2020, aggravated assault and possession of methamphetamine. According to documents filed in the Superior Court of Coffee County, the charges were given less than a month apart. On March 28, 2020, Simpson was charged with assault after he reportedly pointed a handgun at the family of an off-duty police officer. While speaking to law enforcement, Simpson admitted to pointing a gun, but claimed it was a fake. The report also said the weapon was not recovered at the time. Following an investigation, Simpson was arrested on May 11, 2020, on charges of aggravated assault and possession of methamphetamine, an offense he allegedly committed a few weeks later. He was released on a $50,000 bond in January 2021 after the judge denied his motion in two prior hearings. A trial may be scheduled for William Jared Harper on charges that carry a maximum sentence of 40 years in prison if found guilty by a jury.

Harper was charged on May 22, 2020, with one count of aggravated assault and one count of kidnapping. A warrant issued for his arrest accuses Harper of choking his former spouse "to where she could not breathe" at a residence on Peterson Avenue in Douglas. The victim and Harper share three children, according to court documents. Harper is also charged with kidnapping after he allegedly took the female from the home without her permission. He was denied bond in September 2020 and has been incarcerated in the Coffee County Jail since.

The next defendant whose fate may be decided during criminal week, Kadeem Williams, allegedly assaulted an individual with a handgun at a residence in the Oak Park community on October 16, 2021. He was arrested on October 26 on one count of aggravated assault and one count of possession of a firearm by a convicted felon. He is currently housed in the Coffee County Jail.

The last individual facing an aggravated assault charge on the September criminal trial calendar, Anthony Hudson of Ellabell, made local headlines last year when he allegedly opened fire at the Circle K on the north end of Douglas. Officers at the time reported that Hudson had stated he heard two individuals talking and making jokes, one that was directed at his dog, which was in the vehicle with him at the time. According to an incident report, Hudson then took out a .22 rifle and began shooting at the individuals and their vehicle, with a bullet grazing an individual under his arm in the process. Hudson then fled north on Highway 441. Officers stated that they attempted to stop Hudson, but he refused and led law enforcement on a chase until he crashed his vehicle just north of Broxton. He was arrested on several charges including three counts of aggravated assault, simple battery, fleeing or attempting to elude a police officer, and possession of a firearm by a convicted felon.

Two men accused of committing a burglary at a church and residence in Nicholls on two separate dates in 2021 are both up for trial this month. The case began on November 2, 2021 when Coffee County Sheriff's Office deputies were informed that an alarm was going off at a residence in Nicholls. When deputies arrived, they observed two suspects leaving the residence in a black Ford Fusion. The officials reported that a traffic stop was then attempted, with the suspects fleeing before wrecking the car and then running from law enforcement on foot into a nearby wooded area. Shortly after, both suspects, Benjamin West and Kendall Sanders, were taken into custody and charged with one count of burglary. However, as the investigation continued, additional information was obtained that led to a second burglary charge for a break-in that occurred at Tanner Baptist Church in Nicholls on October 25, 2021. A copy of today's jail roster shows that West is currently being held in the facility, with Sanders no longer being held on the charges.

A woman who is accused of setting two fires inside the Dollar General on Highway 221 North, Kay Yvette Taylor, is set for trial this month. Taylor, a former manager of the Dollar General, was arrested by investigators with the Safety Fire Commissioner's Office, the Coffee County Fire Department, and the Coffee County Sheriff's Office almost a month after the fire was set. Officials reported that the fire occurred around 10:40 a.m. on August 17, 2020, with two separate unconnected fires being set inside. During the investigation, investigators also discovered that a $3,300 cash deposit had been taken from the business and that the fires were "set to distract everyone and to cover up the theft." Around the time of the incident, officials said it was estimated that the damages to the contents of the store were more than $300,000 and damages to the structure were in excess of $399,000. In Georgia, first-degree arson is a felony with a maximum prison sentence of 20 years and a fine of no more than $50,000. Taylor was given a bond the month after her arrest, but was later served again with a bench warrant. After being taken into custody on the warrant, she was once again released on a bond in March 2020.

Another 2021 case set for trial is the state vs. Joseph Dube. A document filed in the Superior Court of Coffee County shows that Dube allegedly unlawfully entered a 1992 Jeep on September 20, 2021. When an officer made contact with Dube, he reportedly "resisted, clenched his fist, and charged" toward the reporting officer, resulting in an additional charge of obstruction. Dube was charged with entering an automobile and obstruction of a law enforcement officer. He was later released on a $20,000 bond.

The state's case against Jeffery Moffet, who is accused of stealing a 2014 Chevy Cruz vehicle from an individual on November 11, 2021, was also announced as ready. After the alleged offense occurred, Moffett was charged with one count of theft by taking and was denied bond in January 2022. He is currently being held in the Coffee County Jail.

The oldest case on the calendar stems from an arrest made by the City of Douglas Police Department after an individual, Lakendrick Carter, allegedly entered and burglarized a home on West Baker Street on June 29, 2019. Carter was arrested on July 1, 2019, and received a bond on September 10, 2019. However, a bench warrant was issued for Carter in September 2020, which he was served on August 4, 2022. Carter's attorney filed a motion seeking a bond shortly after, with Superior Court Judge Andy Spivey denying the request on September 7, 2022.

At this time, specific trial dates have not been scheduled. DouglasNow will report which defendants will continue forward with a trial and if any of the following above individuals plead guilty before criminal week.

More in this category: « Lundy sentenced to 20 years in prison for Walmart sexual assault CHS graduate charged with killing parents in 2019 ‘not competent to stand trial' »
Login to post comments