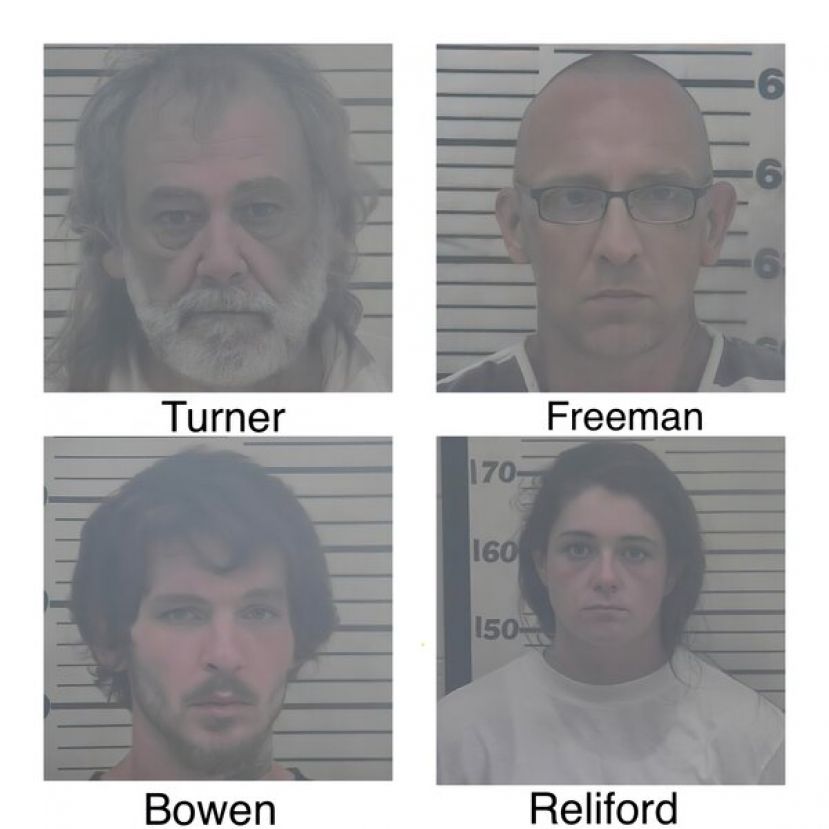 On July 13, the Coffee County Drug Unit arrested four individuals from Douglas on methamphetamine charges after officers found them in a residence where investigators reportedly discovered an ounce of the drug and four firearms. One of the individuals, Rebecca Reliford, had just been released from jail a week prior after she allegedly falsely accused her ex-boyfriend, Dustin Bowen, of stealing her vehicle. Bowen, who was also recently released from jail, was one of the individuals arrested on meth charges in the July 13 incident.

According to a copy of a Coffee County Drug Unit report, drug investigators served a search warrant at 802 Red Clay Road in Douglas. When they arrived, a male at the residence "knocked on the door and yelled to the occupants that the police were there."

At this point, a man, later identified as 59-year-old Robert Turner, was seen slamming the front door on the officers after they announced their presence. The report states officers made entry into the home and three individuals, 41-year-old Joshua Freeman, 30-year-old Dustin Bowen, and 26-year-old Rebecca Reliford, were all seen by one of the detectives exiting the back bedroom.

Investigators with the unit secured all the occupants and then discovered 1 oz. (28 grams) of suspected methamphetamine in the room the individuals had walked out of. One of the investigators reported that 4 firearms (2 shotguns and 2 revolvers) were also discovered in Turner's bedroom, along with a small quantity of suspected methamphetamine in his adjoining bathroom.

Turner, Bowen, Freeman, and Reliford were all placed under arrest and transported to the Coffee County Jail.

Bowen, Turner, and Reliford were all charged with possession of methamphetamine, with Turner receiving two additional counts of willful obstruction of law enforcement officers and possession of a firearm during the commission or attempt to commit certain felonies.

Freeman, who was out of jail on bond at the time, was charged with trafficking methamphetamine.

Reliford was just released on July 5 from the Coffee County Jail, just 8 days before her most recent arrest, after she allegedly falsely reported that Bowen had stolen her brother's vehicle. According to a Douglas Police Department report, a DPD officer was dispatched to Jet Foods Store on June 25 regarding a stolen vehicle. When the officer arrived, he spoke with Reliford, who said she walked inside and left her brother's truck at the gas pumps. When she came out, the vehicle was gone. She told officers that her ex-boyfriend, Bowen, had stolen the truck because he "wanted her back and wouldn't leave her alone."

According to the officer, Reliford also previously worked at the store, and he asked if there would be anyone there that could check video footage to verify the individual who stole the truck. She told the officer that at that time, no one working would be able to pull up the video. The officer told Reliford that without evidence that Bowen had stolen the truck he would not be charged.

After further investigation, Reliford was arrested for false report of a crime and false statements or writing/concealing facts or fraudulent documents in matters of government. She was given a property bond in the amount of $6,000.

This is also not the first time Freeman was charged with methamphetamine; he was arrested in June 2021 for allegedly being in possession of the drug. He received a property bond of $5,000 in August 2021. Then, according to a press release by the CCDU, he was arrested again in April 2022 on an outstanding warrant. In 2016, Freeman was also charged with conspiracy to commit a felony and theft by conversion (misdemeanor), but prosecutors dismissed the charge in June 2020 on the grounds of the statute of limitations.

Turner is the only individual of the four arrested last week who has no prior charges filed in the Superior Court of Coffee County.

According to court documents and a copy of the Coffee County Jail roster, Turner received a property bond and was released this weekend, while Reliford was granted a $6,000 bond on July 15. However, according to the jail's roster, she was still being held on Tuesday morning.

As of Tuesday afternoon, both Bowen and Freeman had not received a bond and were still being held at the Coffee County Jail.