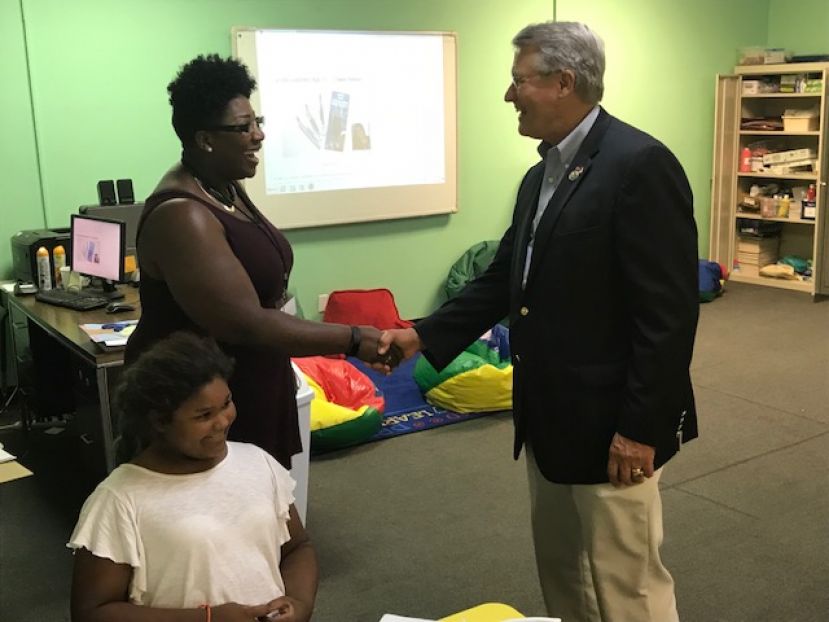 Last Thursday, the children at the Boys and Girls Club of Coffee County were privy to a firsthand look at government at work. U.S. Rep. Rick Allen (R-12th) visited the club and spent a few minutes with community leaders, the afterschool program’s teachers, and the 131 children who participate in the program.

“We can make a difference with these programs. If you can’t read at a third grade level by the time you finish the third grade, there’s a good chance you won’t graduate from high school. And if you don’t graduate from high school, 85 percent of those folks are going to end up in jail at some point in time. We’ve got to stop the cycle,” said Rep. Allen. “If you can give kids opportunities and open their eyes, you’re going to change lives.”

Rep. Allen met with several different groups while he was in town Thursday. After leaving the Boys and Girls Club, he finished up with a meeting at The Atrium with the Coffee County Republican Party. Friday morning, he attended the inauguration of Dr. Ingrid Thompson-Sellers. None of his visits, however, were more important than one he made with the Boys and Girls Club. Earlier this year, funding for afterschool programs such as the one offered by the club was up in the air. There were concerns throughout the nation that funding for afterschool programs would be cut.

Bull Brown, Boys and Girls Club director, has made several trips to Washington to advocate for afterschool funding. An Afterschool Alliance ambassador, Brown has been instrumental in meeting with Georgia’s congressional delegation to share with them the important niche afterschool programs fill in communities throughout the state. Rep. Allen’s meeting last week came out of one of those sessions.

The visit came at a very opportune time. On Sept. 18, the Senate approved a bill that includes an increase in funding for afterschool programs. The House, of which Allen is a member, will vote on the same bill before the end of the month. Allen’s trip to the Boys and Girls Club should be fresh on his mind as he decides how to vote on this important bill.