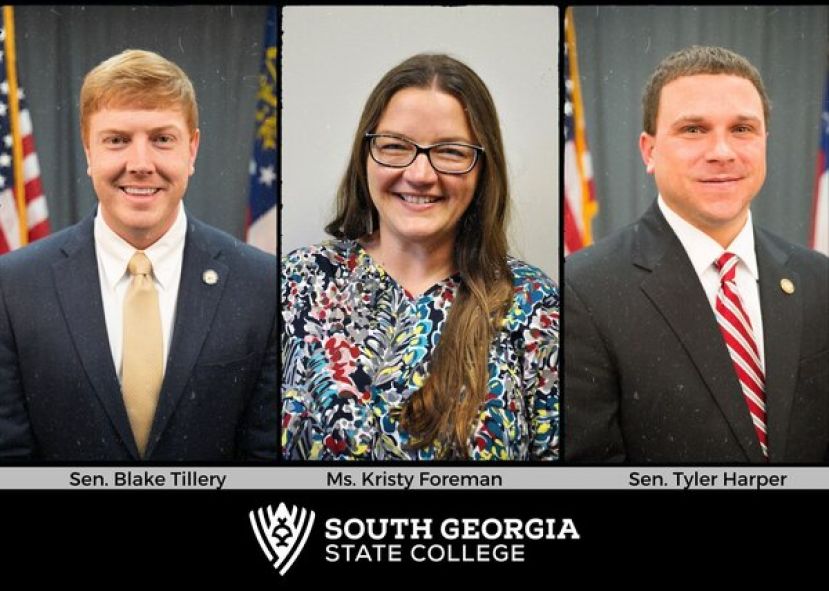 Submitted photo Sen. Blake Tillery, Ms. Kristy Foreman and Sen. Tyler Harper will be the guest speakers at Commencement Ceremonies on the Douglas and Waycross Campuses.

For those unable to attend to share in the celebration, a livestream of each event will be available on SGSC’s Facebook page.

The keynote speaker for the Douglas Campus ceremony will be Sen. Blake Tillery. He was elected to Georgia’s 19th district in 2016. Sen. Tillery represents Appling, Jeff Davis, Long, Montgomery, Telfair, Toombs, Treutlen, Wayne, Wheeler and portions of Liberty and Tattnall counties. The district lines will change in 2023 to include Bacon and portions of Coffee County. Prior to his service in the Georgia Senate, Sen. Tillery was Chairman of the Toombs County Commission. He has previously served on the Heart of Georgia-Altamaha Regional Commission, Heart of Georgia Workforce Investment Board, Toombs County Boys and Girls Club Board, and co-chaired the Leadership Toombs-Montgomery program.

Sen. Tillery serves as Chair of the Appropriations Committee and Vice-Chair of the State Institutions and Property Committee. He also serves on the Judiciary, Economic Development and Tourism, and Reapportionment and Redistricting Committees.

Sen. Tillery graduated from the University of Georgia (UGA) in 2006 with a degree in International Affairs and from UGA’s School of Law in 2010 with a Juris Doctorate.  He was named a Georgia Trend “40 Under 40” honoree in 2013 and is a graduate of the Leadership Georgia Class of 2015. Sen. Tillery married Ashlee Nicole Sharer of Wayne County in 2016. They have one son, an 11-month old, named John.  The Tillerys reside in Vidalia where Sen. Tillery is currently the managing partner at The Tillery Firm, P.C.

Sen. Tyler Harper will provide the keynote address for the 12:30 pm commencement in Waycross. He was first elected to the Georgia State Senate in 2012, and was sworn in to serve Georgia’s 7th Senate District in 2013. As a 7th generation farmer and small businessman who still uses his grandfather’s tractor in the fields tending the same land that his family has had for over 100 years, Sen. Harper has a deep, personal appreciation for Georgia’s agricultural industry – and the millions of local growers it supports. Since 2013, Sen. Harper has worked to defend Georgia’s largest sector as a State Senator – where he currently serves in leadership on the Natural Resources, Public Safety, Rules, Appropriations, and Agriculture Committees. Additionally, Sen. Harper currently serves as the Agriculture & Rural Development Vice-Chair of the Southern Legislative Conference. Over the years, he has championed our farms and farmers, worked to make them more competitive at home and abroad, and helped cultivate the next generation of Georgia agriculture. He has always put Georgia agriculture first to ensure our food supplies are safe and our families are fed.

Sen. Harper lives in Ocilla and is a lifelong resident of South Georgia. He graduated from UGA with a bachelor’s degree in Agricultural Engineering and holds an associate’s degree from Abraham Baldwin Agricultural College. Sen. Harper is an active member in his local community and has helped lead organizations across the state – from his local rotary club, to the Georgia Young Farmers Association, to the UGA College of Agriculture and Environmental Sciences. When he is not serving the state at the Gold Dome or working on the family farm, Sen. Harper can be found enjoying the outdoors, using his skills as a pilot, or at Satilla Baptist Church, where he plays in the band every Sunday.

Ms. Kristy Foreman, owner of Ellianos Coffee Company in Waycross, will deliver the commencement address at the 7:00 pm ceremony on the Waycross Campus.

Foreman was born in Ware County, raised in Waresboro and graduated from Ware County High School with honors in 1997. One of the first in her family in three generations to go to college, Foreman attended the former Waycross College during the 1997-1998 academic year before transferring to Valdosta State University (VSU) where she received a bachelor’s degree in business administration. She worked full-time while at VSU, sometimes holding down three jobs. She took classes when she was able and was a consistent name on the VSU Dean’s List.

After graduating from VSU in 2004, Foreman began her career training to be a commercial lender while working as a waitress and in hospitality management. She moved to Florida to join Chick-Fil-A as a marketing director, which she says ignited her passion for people and service. This passion would lead Foreman to apply for an Ellianos franchise.

Foreman’s application was approved in 2006. She returned to Waycross to open her store, located at the corner of Knight Avenue and City Blvd. That small building has become a well-known location in Waycross, and Foreman is preparing to celebrate her 15th anniversary with Ellianos this May.

People and service are still Foreman’s passions. Her mission is to serve the best coffee while serving the community that has supported her business. She and her staff have raised over $10,000 for local non-profits by hosting Awareness Days and special events, all at Ellianos.

Foreman serves on several boards of directors for local organizations and is the current chairperson for the Waycross-Ware County Planning Commission.

Foreman and her husband Cliff live in Waresboro with their youngest daughter, Karly. They love spending time outdoors with family and compete in 3D archery tournaments throughout the southeastern United States when their schedules allow.

Their oldest daughter, Krista, is a former SGSC student who lives in Jacksonville with her husband Neal Gillis. Krista and Neal have one daughter Emma, whom Foreman calls “the family favorite.”

Foreman chose to come back to Waycross to open Ellianos, because Waycross is where she grew up, most of her family lives in the area, and her roots run deep in south Georgia and the swamp. She believes it’s her responsibility to help take care of the “village” that raised her.

For questions about SGSC’s commencement ceremonies, please contact Mr. Taylor Hereford at This email address is being protected from spambots. You need JavaScript enabled to view it..